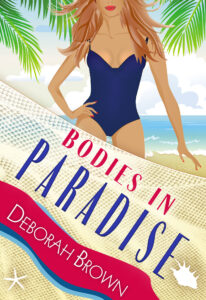 Not even five minutes after my husband, Creole, blew out the door to work, it reopened and my best friend, Fabiana Merceau, snuck inside. Did she knock? Ring the bell? No. Instead, she’d whipped out her lockpick—which she pocketed with a smirk, swinging her long brown hair—and skinnied into the entry, confident that I wouldn’t shoot.

I beckoned her into the kitchen, where I was making coffee. It was such a beautiful day—blue skies, a fluffy cloud or two—and I couldn’t wait to sit outside on the deck. I put the seashell mugs that I’d scored from a local store on a wooden bamboo tray and carried it outside, through the open bank of sliders, to the deck that overlooked the blue-green water below. My favorite place to sit.

“Next time, maybe run by the bakery when you’re planning on stopping by early,” I said in a slightly admonishing tone, enjoying every minute. “Or… I know, bake something. Fresh from your oven would be fun.”

Creole and I had bought the house next door to Fab and Didier in “the compound,” moving from our previous residence at the opposite end of the street. What was now our house and the other house on the cul-de-sac had originally been a wedding present from Fab’s father after they’d bought the third house for themselves. They’d recently rented the remaining house to Casio, an ex-cop, and his kids.

It was nice to have our own house and furniture again. It was a long time coming, after my house suffered major fire damage and Creole’s ended up full of bad memories.

Fab and I grabbed mugs of coffee and settled into a pair of chairs that looked out at the beach, where waves gently lapped the shore on the strip of sand that we shared.

“I’m still loving your surprise.” Fab pointed at the dock and laughed. “Although it didn’t go off quite as planned.”

“I envisioned a dramatic unveiling once the dock was completed and was so wrapped up in it coming off as a surprise that I didn’t think about not being able to hide a boat pulling up and offloading lumber and construction supplies.” I’d had the dock constructed between our properties, extending from the beach out into the water. Included in the design was a large rectangular deck at the end that Fab and I had furnished with chaises for kicking back and enjoying the sunrise or sunset. At least the construction crew’s arrival had caught everyone off guard, and that part was truly a surprise. It had been fun to watch it being built.

Fab wasn’t easy to read unless you knew her, and I did. In truth, she still pulled one over on me more often than I wanted to admit. I’d upped my game and still wasn’t close to evening the score, although I had a few tick marks in my column. If she knew that her face telegraphed when she wanted something, she’d be irked and would work to make sure it didn’t happen again.

The approach of a boat going way too fast cut through the morning quiet. It caught our attention as it grew closer, skimming across the calm water. We watched as the sleek speedboat came into full view and slowed to a crawl. The man at the wheel waved his arm, and two men popped up, each holding one end of a body, which they hurled into the water without hesitation. The body hit the end of the dock with a thud that made me wince, then slid off into the water. Seconds later, the men popped back into sight, and another body followed, this one landing with a splash. The boat roared off.

Fab and I had jumped up after the first one landed and leaned over the railing.

“What just happened?” I stuttered. “Do you think they’re still alive?”

“Neither resurfaced.” Fab grabbed my hand and pulled me over to the stairs. “So probably not.”

Once on the sand, I jerked out of her hold. “I’m thinking you can investigate on your own.”

“I’m under strict orders to behave.” Fab grabbed my wrist and urged me to keep up with her race walk.

“I’ll bet you hung on every word of Didier’s edict and promised ever so sweetly.” Her grin told me I was correct. Didier knew from long experience that he needed to keep an eye on his wife or she’d go off half-wild. “We both know those two will most likely turn out to be dead, and that’s your forte. Corpses make me barfy.”

“My forte?” Fab’s brows went up. “I’m here to investigate, not jump into the water and fish out a body. That’s out of my skill set. If I see signs of life, I’ll toss out one of the life rings.”

I once again jerked out of her hold and skidded to a stop several feet back from the steps to the dock. “Once you’ve made a determination, I’m happy to call 911. Since I left my phone at the house, I’ll run back.” Meaning that I’d walk slowly and stop to pocket a shell or two.

“Nice try.” Fab pulled both of our phones out of her pocket and handed me mine. “So much for my plan to prank you. I promise, though, that I’ll make it up to you.” She moved to the side of the dock and waded in up to the hemline of her sundress. She bent down and scanned the water, then retreated to the sand and circled around to the other side.

“Almost forgot that you rented your other house to a retired detective.” I turned and eyed the exterior of Casio Famosa’s place, wishing he were out on his deck so I could wave wildly. “He needs to get his rear over here and brush up on his detective skills. Probably a good idea for him to stay on his game.”

“When you call him, be sure you issue that order in the same snooty tone,” Fab said over her shoulder. She was now on the dock, moving toward open water and the point of impact for the first man.

“Please don’t lean so far over; it’s giving me the barfs.” Fab ignored me. I called Casio. It rang twice and went to voicemail. How dare he? We needed to have a talk about re-routing my calls. He’d laugh until I did it to him. I called again. Same thing.

“Unfortunately, I don’t have good news. There’s no sign of either man.” Fab straightened and circled the dock one more time.

I continued to call Casio, waiting a minute in between so it wouldn’t go immediately to voicemail.

On about the sixth time, he answered. “This better be good; I’m in a meeting with the Chief,” he grouched.

“Too loud.” I jerked the phone back from my ear. “There’s a dead body at your house. You might want to get it disposed of before the kids get home,” I told him in a so-there tone, then hung up and turned off my phone. I’d turn it back on in a minute or two.

“Casio’s going to find out you’re full of it and then what?” Fab turned and headed back toward me.

“Too late. He’ll be home by then.” I fell in behind her as she came down the steps and sunk my toes in the sand. “He’ll be bringing the cavalry, judging by the laughter in the background.”

Fab’s phone started ringing. She took one look at the screen and passed it off to me. “Didier. That tells us that the guys were all together when you called.”

I thrust it back at her, and she stepped back, a “you’re on your own” look on her face. It stopped ringing and started again. I ran after her, and she eluded me, laughing. I finally answered. “Are you on the way home?” I asked in a saccharine tone.

There was a pause before he said, “You’re not my wife.”

“You’re right.” I wanted to laugh but managed to stifle it. “Fab thinks that because I was a tad misleading to Casio, I should field any calls from you guys. So here I am. How fun is that?” In the silence, I heard a car honking and knew that the men were on the way home. “You better catch,” I said to Fab and tossed her phone through the air without hesitation. She caught it. “That hottie French dude you’re married to is being mean and not talking. You deal with him.” I fished my phone out of my pocket and turned it back on.

I only half-listened as Fab filled him in on the details. The call ended with kissy noises.

“The guys were having a meeting, and the Chief and Casio walked in, looking for snacks. Lark spoils everyone by stocking the pantry with a wide variety of junk food and inviting all to fill their pockets. Casio wasn’t the least bit busy; he just didn’t want to take his attention away from his cinnamon roll. Another Lark treat. On her way into the office this morning, she stopped by the bakery.”

I’d hired Lark Pontana as the office manager of The Boardwalk, a joint family-and-friends real estate venture. Creole, Didier, and my brother, Brad had formed a real estate partnership, and the biggest project to date was The Boardwalk. It consisted of attractions, shops, restaurants, a collection of rides, and a hundred-slip marina, and continued to expand. They dealt with day-to-day operations; the rest of the family were silent investors and only got called on when a vote was needed for a new project.

“Get ready, because the guys are headed this way. Didier put me on speaker so he wouldn’t have to repeat everything, and I heard Casio making the 911 call. He mentioned the sheriff’s office sending out a boat or two, so don’t be surprised when one motors up. It’s been a while since we dealt with that agency, so I forget how they respond.”

“I take it we’re to hang around, like any other crime scene?” I asked.

“You know how the cops feel about eyewitnesses running off. You can bet there will be a hundred questions.” Fab sighed. “It’s the consensus of Creole and Casio that they’re probably both dead or one or both would’ve crawled out of the water or at least be hanging on one of the ladders yelling for help.”

“Let’s go back and suck down the last of our coffee before everyone arrives.”

Fab linked her arm in mine. “What we need is binoculars. I’m thinking we get cutesy storage boxes so they’ll be handy.”

“I hope you’re not implying this will be a regular occurrence.” I made a face at her. “I’m one-upping you and getting a telescope. When I’m not on dead-body watch, I can peek in your windows.”

Fab ground to a stop, turned, and eyed the exterior of her house. “That would be boring.”